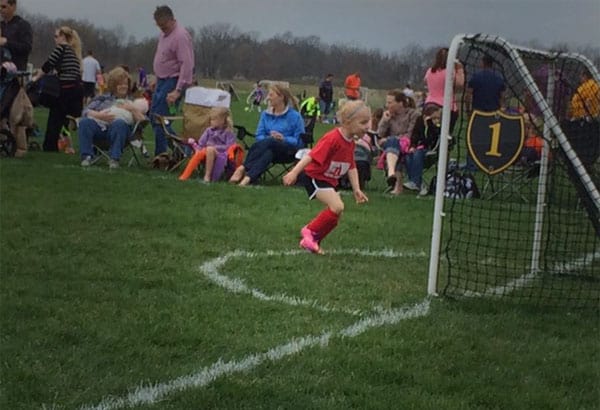 This weekend I got to see my grand daughters first soccer game. Exciting time for us all!

Not only did I get to watch the pride and excitement on my daughters face as she watched her daughter take the field but also the excitement and anxiousness of my four year old grand daughter as she got ready for the game and then take the field.

Well truth is that before the game started I had started thinking how is this coach going to teach a team of 4 year olds about positions and placement let alone moving the ball and strategy.

15 minutes before the game and I really didn’t see any signs of game plan just handing out game shirts and warm ups and I’m getting a little concerned this is going to be a catastrophe 4 year olds running this way and that with no clue of what to do.

Then the game started…

Both teams square off at center field for the opening kick with both coaches on the field with their team. They point their players in the direction of the correct goal and say, “Kick that way”.

Well that is until the ball goes past the goal and the have to reset them on the goal line and again, the point them to the correct goals and again “kick that way”.

And sure enough, goals were scored and they played a full game (20 minutes at this age group).

After all of the high fives and team snacks and we’re on our way home it dawns on me. (Hint this is where the lesson comes in.) I over thought the whole thing! I was putting so much thought in the getting started and hadn’t considered THE GOAL.

So many times we allow ourselves to get so frustrated with the preparation we loose site of the end result. When in all actuality, we just need someone to point us in the direction of our goal and tell us to get kicking!

Of course as we learn “the game” it makes sense to study the game plan and understand your position and grow with the level of the competition we’re up against. Some times the game plan works and sometime it doesn’t and again we have to regroup position ourselves towards the goal and kick in that direction.