Image alt tags are often over looked on many websites.

First let me explain what an image alternate (alt) tag is before going to its use and purpose.

Since some web visitors early on had slower connections they would turn off the ability for images to load in their web browser. This is where the alternative tags (alt tags) come into play.

The website owner would add a tag to the web page code for the image to display discriptive text as an alternative to the image, so that if the images were turned off the web page still made sense.

Today some website owners still add alt text not so much for the same reason as an alternate to the image but to compliment the image.

With today’stechnology if you hover over (place your mouse over an object with out clicking) the alt text will be displayed as small text box floating over the image in most web browsers.

Most people just add an image descriptor which there isn’t anything wrong with doing this, but the marketing mistake I want to point out here is that they forget to add keywords to the tag.

Keywords are buzzwords that visitors use in search engines to find your site. What many website owners don’t realize is that search engines read your alt tags too. So in my opinion, the alt tag is forgotten real estate that many marketers forget about.

It doesn’t take an experienced web programmer to add an alt tag to your web page images.

Here is an example of HTML code for a normal image WITHOUT an alt tag.

Now for a sample of HTML code WITH an alt tag inserted.

Not a lot a difference between the two but by adding the alt tag I added another instance of web resources to my page.

I hope you found this information useful if you liked this tip check out:

All the best and much success.

Frank Deardurff – That One Web Guy!

This website uses cookies to improve your experience while you navigate through the website. Out of these, the cookies that are categorized as necessary are stored on your browser as they are essential for the working of basic functionalities of the website. We also use third-party cookies that help us analyze and understand how you use this website. These cookies will be stored in your browser only with your consent. You also have the option to opt-out of these cookies. But opting out of some of these cookies may affect your browsing experience.
Necessary Always Enabled

Any cookies that may not be particularly necessary for the website to function and is used specifically to collect user personal data via analytics, ads, other embedded contents are termed as non-necessary cookies. It is mandatory to procure user consent prior to running these cookies on your website. 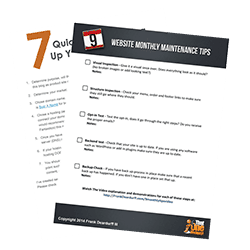 You need information and guidance to grow your business, By subscribing today you will:

• Learn the 7-Tips To Setting Up Your First Blog Site

• Be The First To Know About New Training Material

Check Your Mailbox To Confirm!