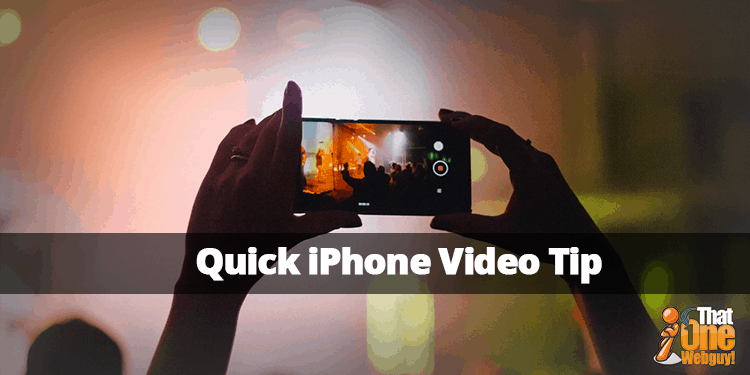 I LOVE taking photos with my iPhone mostly nature, sunsets and grandkids. From time to time I will shoot some video footage as well.

I’ve posted before about some iPhone tips and i’m thinking of adding some additional tips and videos to help other iPhone users learn more about this thing that is way more than just a phone.

We already know that the iPhone takes amazing photos and videos, but one thing we don’t pay attention to is some of the settings. In this post I’m sharing just a quick tip of how to get better iPhone videos with just one setting change.

Most iPhone users I feel do what I did originally and assume that there was only the default setting and that was amazing enough and didn’t think much else about it.

I had heard that you could take “movie quality” video with the phone, so I began looking at it and figured there had to be something more. Turns out that if you go to your iPhone settings and scroll down to the “Camera” option and open that up you will see some settings there you may not have seen before.

The feature i’m talking about for this post is “Record Video” and it probably is set to 1080p at 30 fps. Now you’ve probably heard the first term just from people talking about TV sizes and know that 1080p is a pretty nice quality. the “p” refers to pixels which is a unit of measurement.

The second number (30fps) is “Frames Per Second” and to simplify the meaning the more frames per second means more detail and a smoother image overall.

If you click on that row that says “Record Video” on the settings panel you will see the following screen showing the different options you can choose from.

Obviously the default is checked, and you can see you can go all the way up to 4k at 60fps which is the highest resolution and the smoothest quality. You may also notice that while you are getting a better video you will also consume more storage space.

The storage shown in the image above is for One-Minute of video. So, at the highest rate each minute of video is 400mb (mb = MegaBytes). In saying that megabytes may be hard to determine as it is a smaller unit of measurement than your phone storage reports.

Your phone shows your storage space in GB or Gigabyte. Easiest way to look at it is 1000 MB is equivalent to 1 GB. Actually 1024 MB is 1 GB but it’s easier to round off.

So if you shot a 10 minute video at the highest setting you would use 4 GB of storage on your phone. That is probably why the default is 1080p and 30 fps because the same 10 minute video would only require 600 MB or .6 GB

I know that is a LOT of information, just to say that if you want a really high quality video make that quick change to the highest setting but I’d be sure to set it back when you were done and probably move the video you shot to off device storage such as iCloud or Dropbox just so you still have room for your other iPhone favorites.

If you have questions about anything I’ve mentioned in this post be sure to ask in the comments section below.

Also, I know when it comes to tech questions some people feel uncomfortable posting those publicly, so go ahead and use the contact link in the menu and shoot me a message. Chances are there are others wanting to ask the same question. And rest assured, if I answer it on my blog no names will be mentioned.