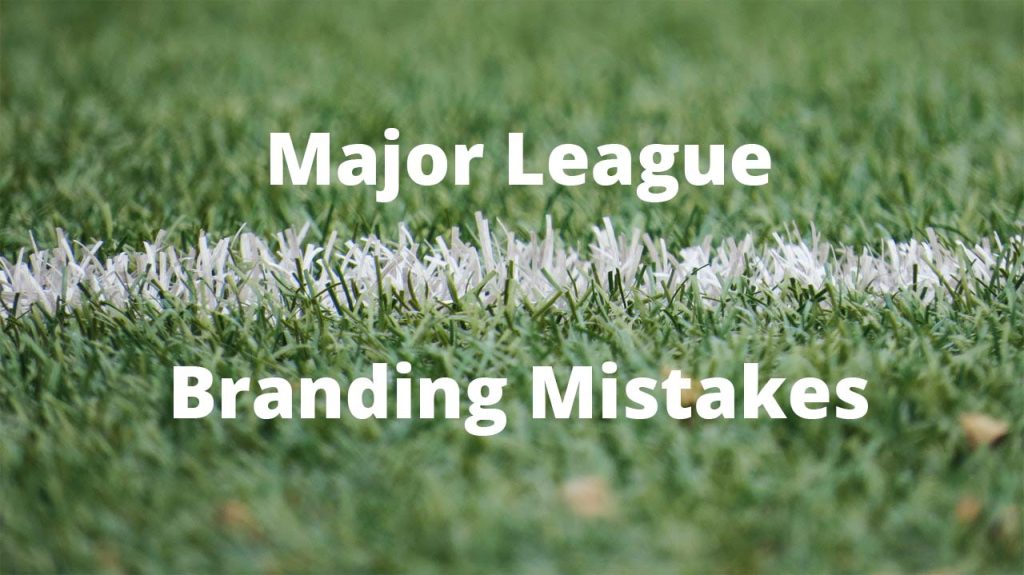 If you follow sports at all you’re probably aware of some name changes going on right now. It is these name changes that one, make me shake my head. And two, makes me wonder how major league teams can make these branding mistakes.

These large corporations have teams of thinkers, lawyers, branding specialists that do nothing but focus on the brand. Years and years of educational training and experience and yet mistakes are made at a major league level.

Actually you probably don’t even have to follow sports much at all to know that the team formerly known as the “Washington Redskins” changed their name nearly two years ago to the “Washington Football team”. Now I want to point out straight away that I will not get into a discussion about the reason for the changes mentioned in this article. That would just ruffle feathers and potential hurt feelings. I’ll just leave it at the fact I understand the reasoning behind it.

The focus here is the actual changing of the name and to me the lack of thinking that went behind the final name they decided on.

It took the Pro Football team approximately 18 months to decide on the new brand of their team, not to mention the estimated $10 million dollars it will cost to facilitate this name across the stadium, merchandising, uniforms, and all other aspects the team name is displayed on.

Sadly, I think they missed the boat in a few areas with the branding. The “NEW” name if you haven’t heard is “The Washington Commanders”. A spokesperson for the team says it stands for service and leadership for which the area is known for. It seems Washing DC has had a history of name changes. If you recall Washington had a team named “The Bullets” but in 1995 changed the name to “The Wizards” because of the statistics for crime in the area.

The Logo is now changed to a Large W and the main graphic is a seal with that W, three stars and a lot of text. While the seal looks classy I think it misses the brand of a football team.

You can’t look at the logo and say “Oh that’s a sports team”. Additionally if you’ve ever been to a sporting event there is cheering that goes on. Generally the team name is short or can easily be abbreviated.  For Example if you think of the Atlanta Braves, the fans can shout “Go Braves”. Or “Go Cubs”, “Go Colts”, etc. If the team has a longer name such as the Chicago Blackhawks you will hear “Go Hawks” from the stands. Or a team name as long as the Tampa Bay Buccaneers you will hear “Go Bucs”.

Go Commanders, is way too many syllables to break down for a cheer. “Go Comms”? “Go Ders”?  It seems to me not much thought was given to that which is something that should be considered. In addition to that the name Commanders is a very lengthy word to try to fit on merchandise. I’m guessing most merchandise will have the Large W just for the fact the space a 10 letter word would take up in design on clothing.

Does the name Commanders make you think of a powerful winning force or just a bunch of people leading by giving “commands’ or directions? I have some more thoughts on that but first let's look at another recent change.

The Cleveland Indians changed their name to the Cleveland Guardians. Again, another long name that can’t be broken down for cheering on the team. Go Guards? Three syllables? Guar-di-ans. Yeah that works. NOT.

At least their logo looks sport-ish 2 winged G’s wrapped around a baseball in a pitching format. The Major League branding mistake here is of course the aforementioned length of the name, but also, there is already a Cleveland Guardians sports team. Sure it’s a roller derby team obviously not the same sport but just the same.

In addition the other team whose name they're stealing already has the domain name with the team name.  Another Major branding mistake. While it’s not a bad name, why cause that extra identity crisis when not needed? And again how many millions was spent on deciding on this name with reckless abandon and not doing the due diligence of even googling to see if the name existed.

It would’ve been a little easier if it were something like the Chatanooga Guardians but to even use one from the same city just does not make good branding (or merchandising) sense.

So, enough on my “rant” what can you do to not fall into the same branding mistakes?

There is more to picking a brand than just saying we are “THIS”. While you probably won’t be spending 10 million dollars on branding or rebranding. Why cost yourself any unneeded expense by not following the steps above. I’d rather see you have major success then make major league mistakes.